In 8th grade Social Studies we recently finished out latest Project Based Learning endeavor. The driving question was should Native American be allowed to operate casinos on tribal land. The idea was that in answering the question students would address Manifest Destiny, westward expansion, Andrew Jackson, Trail of Tears, ideas of sovereignty, the India Removal Act, etc. They would also have to think about what this means in a contemporary fashion. Therefore, they studied court cases, compensation, and reservations. They pretended to be lawyers and presented me with either a defense of or case against Native American casinos. The presentations rocked and it was fun for all. Today was assessment today which means that they responded to two of four questions (One via a group and one individually).

How have Native Americans been treated over American History?
Who was Andrew Jackson and what were some important events during his presidency?
What is sovereignty and how does it relate to Native American Gaming?
Should people get compensation for past discrimination?


They could  do this via an imaginary twitter feed, a short essay, an illustration, or an imaginary facebook page. Basically, you name the way to answer, just make sure there is correct factual information and good analyzation. As they were doing this a student stopped me and said, "you are an awesome teacher...I wish other teachers were like you". Three things crossed my mind:

a) I have never heard a student say this during a "test" before!
b) I was extremely humbled
c) I realized I wasn't really a teacher for the last two weeks

So my response was, "Thank you, but I prefer the term an awesome co-learner." The poor girl was dumbfounded and I don't blame her. I then went on to ask her who was at the front of the classroom presenting last week. She said, "We were" and then I asked her who helped her understand the material and she responded, "lots of people, my group, and you." "Well then we all learned from one another right?" I went on to tell her all the things I learned from the class.

Here were just a few:
-One group gave a wonderful legal history of court cases between Native Americans and the United States. I was fascinated!
-One group described medical conditions of Native Americans and made an argument that it was a result of poor land and economic prospects we gave them
- One group retaught me how to use Google Forms
- One group even researched the term genocide and made an argument that the Trail of Tears was nothing less 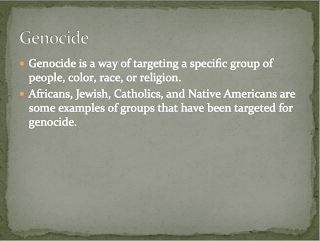 Part of one group's presentation

Somebody asked me today why I love being a teacher and I promptly said because I get to learn everyday. It is fun when I see this in action.

Comment by Erika Podlovics on April 25, 2011 at 8:02pm
Incredible! It sounds like you have really inspired your kids. I also think that PBL is a really powerful way to teach and that more teachers should make use of it at earlier ages.

It sounds like your students appreciate the learning opportunity to you gave them, and vice versa :)