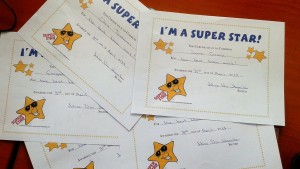 We have started with the intention to shake up things a bit in the English classroom and we did, with the first flipped lesson in an attempt to teach the degrees of adjectives! After the second (and final, as we had initially planned) flipped lesson, all I can tell you is that this experience has to be repeated, primarily for my learners and, definitely, for their English teacher!

The second lesson was delivered at the learners’ home, by means of a video that the learners enjoyed while completing a worksheet. You can see the related school blog post they had to visit here! The video had nothing to do with grammar, this time, so, when the 6th grade learners heard it was a comic based on Shakespeare’s play “A Midsummer Night’s Dream”, they could not wait to go home and watch it!

When they were given the worksheet with instructions to complete it while watching the video, they were not particularly excited, but when they took the time to see what they were invited to do, they encouraged each other to watch the video and fill in the worksheet, given that they would all want to contribute to their group of work during the next session and they would all go after the award for the best team work in class!

Coming back in the classroom after watching the video at home, five of my fourteen learners had been absent, owing to this terrible flu that has been torturing many children and adults lately! We tried to postpone the lesson, but three days later, five other learners had been absent, so, unfortunately, we had the lesson without them! They all claimed to have watched the video and, what followed, really proved them honest! Learners were separated into two groups, that very quickly ended up being three, given that some learners thought they would work better if they were in a smaller group! First, they checked their worksheets and negotiated the correct answers with the members of their group! I wish I had that on a video … They were speaking English without realizing it, they were helping each other understand why something was incorrect or misunderstood, they were encouraging and supportive and they were not judging or criticizing others for making mistakes! The teacher was only restricted to monitoring (while actually feeling unbelievably proud of her learners!) and taking pictures of the process. 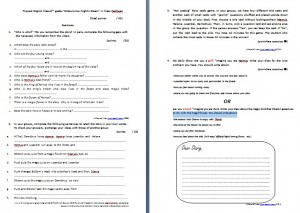 When we all checked the video worksheet, learners were given another one that has been designed for in-classroom use. The first task invited them to answer questions related to the play/comic they had watched. Although there was concern that they would not find it very challenging, in reality they seemed very engaged to do it, involving all the group members. It took them a bit more than expected, but the result was really rewarding for everyone! During the second task they were invited to complete sentences related to the play/comic they had watched. Once again, they were really dedicated to finishing the task and passionately negotiating the correct sentences! Unfortunately, we did not manage to finish the task in that teaching session, so we had to finish it on our next lesson.

And we actually did! At the beginning of the following session, the learners came in with excitement, joined their groups without being told to and started working almost immediately! It is worth noting that no one had forgotten their photocopy and some of them had already worked a bit at home, without writing anything on their worksheet, waiting for the approval of the whole group. When they finished this task, we played the “Hot seating” role cards game, but, because of the lack of time, we had to adapt the procedure in order to finish it in time: one learner in each group was sitting on the ‘hot seat’, assuming one of the roles of the play and not telling his classmates which one! They were asked to find out who the person on the ‘hot seat’ was by asking questions! The one who would find the correct answer had to sit on the ‘hot seat’ and continue the game! It was quick, it was engaging and it was fun! Finally, the last writing task was assigned for homework-everybody who attended the lesson actually brought it completed the next day!

THE FLIPPED CLASSROOM – LESSON 2 – A Midsummer Night's Dream from viv_h

I can almost hear you thinking … “Is this for real?” Well, I swear that this one was and I feel so lucky to have tried it! However, it should be noted that no one can guarantee that flipping the classroom will work equally successfully at lower levels, or same level but less competent learners, or more crowded classes! Whatever the challenge, though, a well-designed flipped lesson is more likely to shake things up a bit in class and have your learners begging you for more! We actually finished the second flipped lesson on Monday and today, only two days later, they asked me when we are going to flip it again! I did not give them a straight answer, but I know that we are flipping it again some time after Easter, because I loved the look on my learners’ faces and the frequency of the in-class oral and written production of the target language and appreciated the role of the coordinator, who monitors the whole process in a purely student-centered approach! Once again, thank you Ms Andriani Rigoutsou for this eye-opening experience, congratulations on your exceptional work on the materials and good luck with your dissertation! Looking forward to cooperating with you again!